Things have been a little bit hectic, and I've had some massive personal changes. Most of them I couldn't mention until they were official, so I've made myself scarce on the blog; the temptation to go "Oooh! Guess what happened!" is just too much.

I went through redundancy for the third time in about four years. This time I took the payout. When the universe thumps you on the head this pointedly, it's time to listen.

The migraines reduced almost immediately. I've suspected the combination of fluorescent lighting and computer screens for a while now, topped up with a fairly unhealthy dose of work-stress. I've been almost completely migraine free since I was informed I was up for redundancy and escorted from the office carrying whatever I could grab from my desk in five minutes.

The problem is that almost every office (at least in the UK) has fluorescent lights. I have no intention of losing a job because my body hates me, and migraines three or more times a week guarantees that. I also really, really like being pain-free. It's a novelty that I appreciate.
The solution for me is to work from home and take regular breaks from the computer. Freelancing, whahey! Part of me wishes I'd done it years ago; the other part knows without this push and the migraines I would never have done so.   I'm also web-site testing and doing transcriptions (better money, slightly harder than pounding out 500 words for an article) and I've recently rediscovered how much fun I have repainting gates. Not a joke, I really do enjoy it.

The problem with freelancing is that money can be sporadic and London is expensive. Food alone seems to have tripled in the last few years; rent is no longer even remotely funny. Spending 70%-80% of my new income on rent does not appeal, and since I was doing that on a regular salary, I could end up in trouble.
So I'm moving to Scotland. Good people, cheaper prices, I'm trying not to think about winter. I've been there in winter. It hurts. The Scots do, however, believe in central heating and double-glazing, two things which have been sorely lacking in every rental property I've been in during my time in London. I'm looking forward to not getting frostbite in the bathroom. I'll have a garden for the first time in over ten years. I can hang my washing outside, and trust me, that's huge. Ten years of indoor laundry. *shudder*

The logistics of getting two people (Stace decided the move would be good for her too), three cats and a house full of stuff to a different country is slightly mind-boggling. When I moved to the UK I had a suitcase with a few clothes in. Now I have books and art stuff and computers and furniture, and my subconscious keeps sitting up, blinking stupidly, and wondering when the hell I got all this stuff.

On kitty news, Sheba is bouncing around quite happily. She has also managed to FaceTime my mom and take a selfie, which means my cat is more technologically advance than I am. I had no clue how to reverse the camera until she did that.


Bast and Hathor just keep growing. They've turned into well-adjusted, happy cats and are thinking about writing a book called How to Train your Human, and will include chapters on "How to get More Treats without Trying", "How to Throw up on Their Favourite Slippers" and "How to Clear a Mantlepiece". 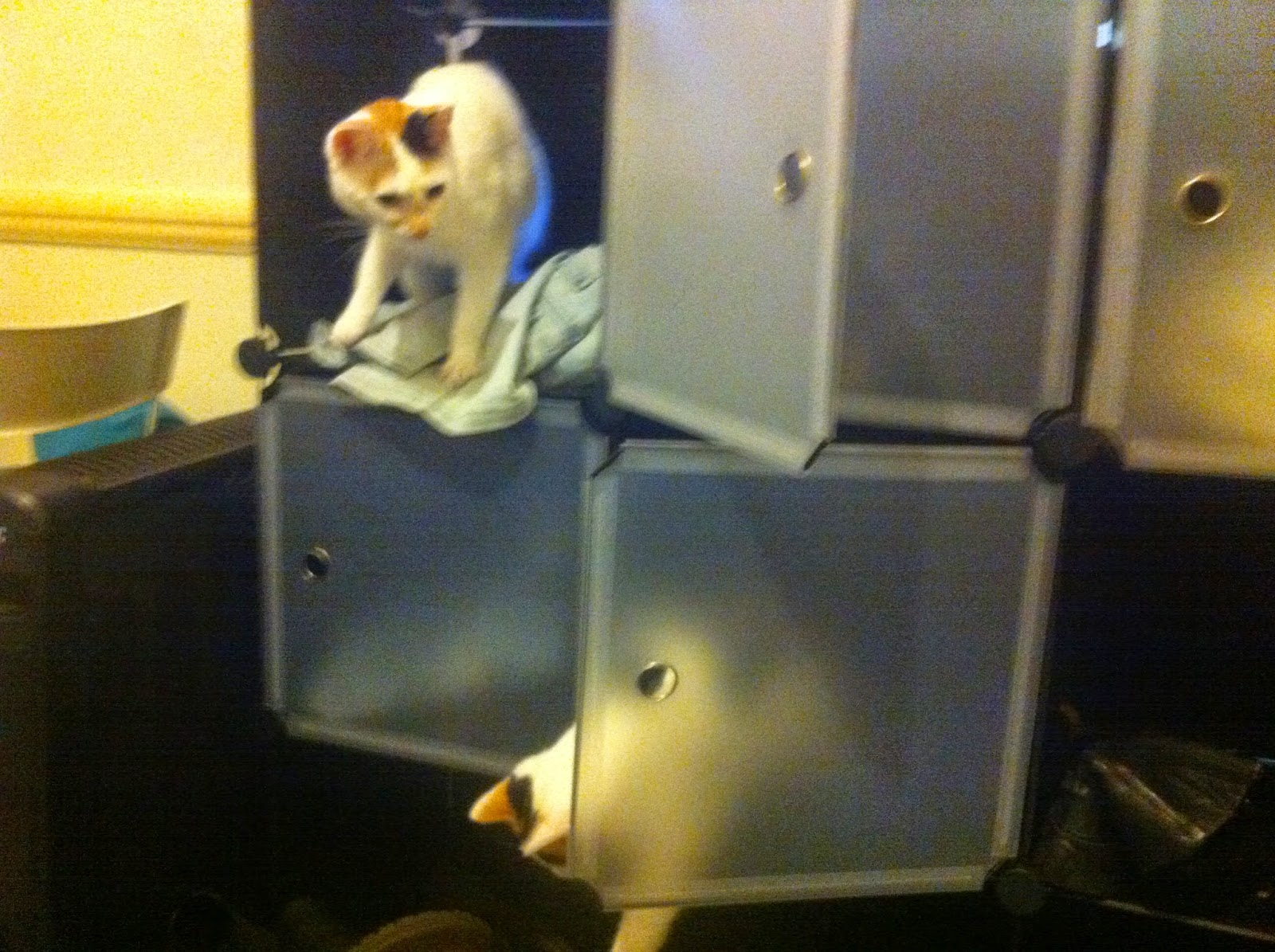 Posted by Unknown at 11:50 No comments: Links to this post