I met Odin's human a few weeks ago. Nice lady. Turns out the boy is 12 years old, which explains a lot of the weight issue, as well as the eye - that's something that happens in elderly cats.

Her house was for sale. A month ago, a sold notice got slapped up.

In the meantime, life continued. Odin came by every morning. He sat in my lap while I had my coffee, and I fed him breakfast. His coat turned glossy and soft. He head-butted me to get cuddles and loved being picked up. He'd lie on his back in my lap and drool happily. He smelled like green grass and talcum powder and rich black earth. On weekends he'd spend hours with me. He fascinated my three, who followed him around the house like ducklings.

His human was worried about the move. She took in a dog that's tormenting him, and is furiously jealous over any affection shown to him. I offered to take him, and she thought about - but in the end, she couldn't give him up. If he doesn't settle, though, I've told her the offer is open.

This Friday, the move happened. Odin came for his last breakfast, and I held him and smelled his fur.

There will be no more cuddles in the alcove.  No more loving head-butts and soft quacks and the gentle knocking of big paws on the front door, asking for breakfast. My mornings are oddly empty now. 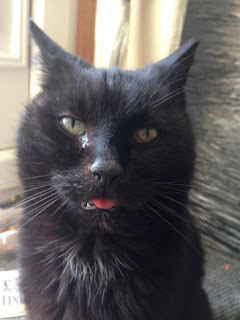 Posted by Unknown at 17:18 No comments: Links to this post