Almost a month ago, I posted a very short blog about a soldier who contacted me regarding Operation e-book drop, and tweeted about it.

I got a tweet back, and a comment from Bert Carsons, and started swapping a bit of banter. A couple of days later, his wife Christina, joined in, then Kathy Hall and Dannie Hill. Great bunch of people, and talented writers - I'm having to eke out my book buying, but trust me, you don't want to miss this bunch - and if you're on twitter, hit them up - I'll their tweet handles at the bottom of this post. At the very least, you'll want to look at their blogs (and if Dannie & Kathy don't have you in stitches, there's a good chance your sense of humour fell off at the last stop).

The last couple of weeks have been difficult - stress levels I've never had before, and hope to never achieve again. A couple friends I've made on twitter - Teresa, Rayray, Rebecca,  Lorraine and Mhairi Simpson have helped with a great deal of it just by being hysterically funny.

The Carsons - and I'm definitely including both here, because I've never come across a couple that seem to function so symbiotically; these two go together like bare feet and beach sand - have been a reason for to get up in the morning.

Then he started tweeting quotes from my book. Then he got Iggy Pintado to retweet it and suggested I follow him (of course I did), and Iggy promptly DM'd and offered to retweet something for me.

Let's just say that I've been floating on air for most of this weekend.

The part that blows me away about all this is that Bert did all of this off his own bat. And it's not like he's got that much free time on his hands; he has three books out, two more coming in September, according to his blog. He works a day job. And a look at his twitter stream shows a very active and social man, with over 2500 followers.
And he found the time to do this for me. To interact with one very newbie author who often suffers from foot-in-mouth and a tendency to trip over her own feet.

I'm the first to admit that I can be very cynical about humans, up to and including myself. But people like the Carsons blow that theory out of the water. Bert uses "Yours to count on" as his trademark signature. I can say from experience those aren't just words. He lives them.

So now when I can't sleep, or when I get up in the morning, I touch the little blue bird on my phone. I check out my friends and their feeds, and it feels like coming home.

Twit-buddies you want in your life:
@BertCarson
@CarsonCanada  - Christina Carson
@RedMojoMama - Kathy Hall
@DannieC_Hill
@iggypintado  - entrepreneur and social business manager; be warned you may spend hours just scrolling the links on his feed and clicking
@AMhairiSimpson

Thanks to all of you.


A couple of months ago I made excited fan-girl noises over Voice, a great little horror I picked up on kindle.


Joseph Garraty has since become a twitter buddy and pen-pal of sorts, and if you aren't following his blog yet you really should be. He's a busy guy, so when he agreed to a guest post for me I made more excited fan-girl noises.

Follow Joseph's blog at : http://www.josephgarraty.com
Take it away, Joe!


On the other hand, I recently released a horror novel full of bloody and horrible events, and this is me on stage (head blurred, due to banging): 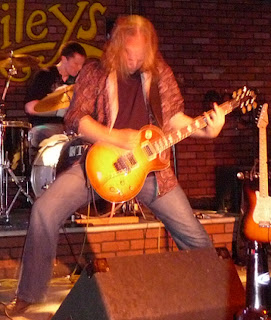 It would be reasonable for the casual observer to ask just what the hell is going on here. How in the world do horror fiction and loud rock and roll music fit into the life of a man who breaks out into a nervous sweat if it  looks like he's going to be a couple of minutes late to an appointment?


I've spent a bunch of time thinking about that, and I don't think its a contradiction at all. I think it's actually healthy (but then I would think that, wouldn't I?). Here's why:


Modern life is essentially a contest between the higher functions and the lower, between long-term goals and immediate needs - or, if you're into literary criticism, between the Apollonian and Dionysian. I am not into literary criticism, so I'll call it a contest between being a social animal and just being an animal. One the one hand, for society to function we need to cooperate, to make accommodations for each other, and, yes, to drive the speed limit. On the other hand, our ancestors (and I'm talking ancestors back to friggin' protozoa here) did not survive by driving the speed limit. They survived because basic animal biology is driven by what my brother's bio professor called "The four F's:fighting, feeding, fleeing and ... reproduction." That shit is wired in to our biology—we wouldn’t be here if it weren't.

If there’s a contradiction, that’s it. The human animal is wired with tension at the very foundation. Coping with that basic tension, though—there’s nothing contradictory about that, and that’s where the horror fiction and loud music come in. At first glance, the works of Stephen King and, say, Mötorhead don’t seem to have a lot in common. But if we peel back the surface layer, what do we find?

The four F’s. Everywhere. Rock and roll at its core is a celebration of the fourth F, the music of reckless abandon and pure sexual energy. Done right, there’s nothing cerebral about it—it all comes straight from the gut, or maybe the pelvis. Horror fiction is a different animal, much more concerned with fighting and fleeing—and feeding.

The way I look at it, the two complement each other perfectly, and indeed have been enthusiastic partners for a long time. Go back and dust off the legend of Robert Johnson, the blues player, and right there you have the roots of rock and roll coupled with a deal with the devil. Later, of course, Black Sabbath came along and married the dark themes of horror to rock music in a more explicit way, and in doing so spawned an entire genre dedicated to that marriage. Nearly all heavy metal imagery is laden with horror themes—just walk into the music store (does anybody do that anymore?) and grab any metal CD at random, and you can’t miss it. Hell, Metallica’s got at least one song based on a Lovecraft story, and it doesn’t get more obvious than that.

I believe we get balance in our lives from experiencing these things. The human brain is an immensely complex and powerful simulation engine, and by channeling your favorite Dionysian art form (oops, that slipped through) through it periodically, you keep the humors in balance—absorbing the art is, in fact, neurologically similar to having had those experiences yourself to some degree. And you get it without the vast social and personal disruption of satisfying your four F’s the hard way.

I don’t think this is a catharsis thing, either. It’s not that we go through life and then one day need some rock music and a bloody story to keep us from exploding, any more than we go through life eating only steak and then one day need to eat some asparagus to keep from exploding. It’s balance.
And, as an animal that basically wants to fuck and eat, and wants it right now, living life in a society that wishes we’d all obey the speed limit, a little balance goes a long way.

That’s my story, anyway, and I’m sticking to it.