A couple of weeks ago, Bast threw up in the lounge. A pool of white froth, it was startling mainly because he doesn't throw up; unlike Sheba, who does so at least three times a week.

Then he galloped around like his usual self. Cats throw up. It's one of the things you learn to live with if you have a cat.

That was a Sunday. Tuesday he came downstairs and threw up in front of Stace while I was at work. She called the vet and took him in, because he wasn't being his normal self: no appetite, no running around, and his sides were shrunken.

The vet put him on a drip because he was seriously dehydrated and kept him in overnight. Multiple x-rays followed. There was some sort of blockage in a lung. Possible heart damage. They didn't think he'd make it.

The next couple of days were a blur of vet updates and cold, hard fear. Fear is a funny thing. It's one of the most physical emotions, and it settles into your stomach and heart and mind and squeezes until your lips go numb and you struggle to think past it. It's the third time this year I've had that experience, and I'd sincerely like it to never happen again.

The vet had no clue what was causing the blockage. Stace and I scoured the house looking for something the boy might have eaten. Nothing. Nada. Zip. We've tried to make the house pretty much cat-proof - no poisonous plants, no sharp objects left lying around - but still, a house collects objects and he could've swallowed anything from cardboard to cinnamon sticks.

The vet took something like 700 ml of liquid off of his lung, and sent it off for analysis. Every time the phone went we expected the conversation to start with "I'm sorry, but..."

More tests and x-rays. More phone calls. Had he fallen? (Unknown) Been hit by a car? (Definitely not.)


In the meantime, Sheba and Hathor searched everywhere for him. In the cupboards. Under the pillows on the bed. Behind the couches. Eventually Hathor retreated to his favourite sleeping spots in turn, curled up and withdrawn. Sheba sat down on the stairs and howled.

The last set of scans after the fluid had been reduced showed something out of a horror story: Bast had a hole in his diaphragm. His stomach had navigated up and into his left lung. His heart was thankfully undamaged.

Bast was transferred to the vet school in Bearsden, and Stace and I rushed over to meet the surgeons. It was operable. Barring severe complications, and provided he made it through the op, we'd get our boy back.

We went home to wait.


They phoned the next morning to let us know he'd sailed through the op. He'd ended up with both his stomach and several feet of his small intestine in his chest cavity and lung; trauma usually only seen in car accident survivors. There is a chance it was a birth defect, or possible caused by the abuse they suffered as kittens. How he survived so long without it coming to a head before is unknown.

We picked him up on the Sunday morning, and he purred and cuddled up to us all the home through his carrier.

Three paws, his neck and his belly were shaved down from the frantic efforts to save him as well as the op itself.

He was stapled down the length of his chest and belly, which annoyed him because he kept wanting his belly rubbed and we wouldn't touch him there. So he'd walk sedately around the house after us and hurl himself to the ground if we looked at him, then complain bitterly because tummy rubs weren't on the menu.

We were given vials of oral painkiller that had to be squirted onto his gums, (after the first attempt ended up with painkiller on the ceiling, up my nose, and along Stace's sleeve, we stuck him in the carrier with his head sticking out and lifted his lip to squirt the stuff in. I'm fairly sure we were more traumatised by the process than he was.)  and a tablet that was crushed into his food for the next week.

This Wednesday the staples came out. He's eating and playing and back to being our usual happy boy. Hathor and Sheba are much happier as well. Christmas was definitely good; the best present was getting Bast back safe and sound.

Here he is in all his shaved-down, post-staple glory. You know Bast is happy because he gets a smile on his face.

I hope your Christmas was just as good. 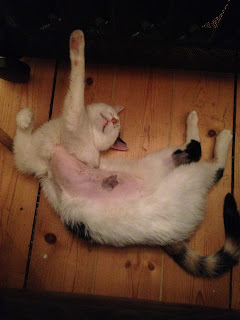 Posted by Unknown at 14:25 No comments: Links to this post