Last weekend I found myself back in Westgate-on-Sea, and we ended up at Walmer Castle. This was built by Henry VII as one of a bunch of coastal defences, and it was in use right up until the 1940's. There've been a LOT of renovations, so not much original (apart from the walls) remains in the part we saw.

This is where Wellington died, and the room he used is open to view. The bed is tiny, and looking at the furnishings, this was not a man who wallowed in luxury.  No pics here, as we weren't allowed to take photo's inside this part of the building.

There are cannon, which made a lot of kids very happy - I don't think I saw one that wasn't been ridden like an iron horse - there is a moat, with gorgeous plants and flowers. There is a decorative fish pond and working kitchen gardens. 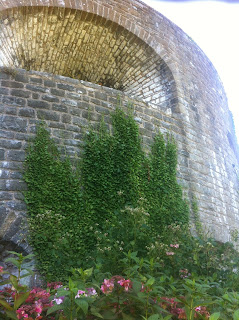 Strangely enough, I haven't been able to turn up any stories about it being haunted, and for an old site that is very unusual. Especially considering the photo's below, taken on my mobile in the basement.

This picture to the left is the first of three that were taken one after the other, with an automatic flash. The phone is an iphone 4G.

I tend to take a lot of pictures; odd textures and things I just like the look of. You never know what might be perfect for the next book cover.

This particular part of the basement has a little tunnel of sorts leading to a wall visible at the back of the photo. I imagine it led somewhere in the main building at some point - possibly a short cut for the soldiers to use - but there are so many covered entrances and bricked up doorways it might be hard to trace. It was roped off, and narrow, and I had no interest in getting stuck down a National Heritage building tunnel and having to be rescued by the fire department, so I took my pictures and wondered away.  I reckon maybe 5 seconds passed between the first and the third picture being taken, I just pushed the button repeatedly.
It wasn't until I got home the following day that I showed these to Stacey, who pointed out the figure in the pictures. While it isn't very obvious in the first two, this third one floored me. I kind of regret not sneaking down that tunnel now. There were only two of down there. The tunnel/passage is not very long, the roof is fairly low compared to everywhere else in the building, and anyone else would have been exposed immediately by the flash. (I also really regret only taking three pictures here.) I've posted this one as large as my cranky little macbook will let me.


Then we went around the corner and found this, under the stair case we'd walked down earlier.

Since it wasn't blocked off, we ducked into it. About three stones up from the bottom, there was a strange carving.

I've seen that symbol somewhere before, but google has sadly failed me. It's driving me batty, so if anyone can tell me what it is, I'll be quite happy.  The first National Heritage lady we showed the pictures to got quite excited. The second one, who went back down with us, looked like we'd just kicked her puppy. (I have the strange feeling that area will get roped off in a hurry.) She did tell us that they had no record of the carving, that it appeared old, and that since a lot of the stone was re-used, it could have come from anywhere. That particular bit of wall appears to be either limestone or chalk, which would probably make it local. The chalk cliffs are ubiquitous in this part of the world.  The stones just to the right of the carving look like something may have been there, but has either been removed or fallen away. While the rest of the stones were cut and relatively smooth, this particular block seemed peculiarly lumpy.


If anyone can shed light on the carvings, I'd love to know. Overall, this was a great day out. And the gift shop has some of the best ginger wine I've ever tasted.