This blog has been sadly neglected the last couple of weeks, since once again, I've had my usual effect on technology.. meaning my home PC is currently the worlds largest paperweight.
Anyone in the vicinity of my home town a couple of weeks ago probably heard the wailing, screaming, and gnashing of teeth.

Thankfully, my little net book is now co-operating, although Word is not, and is currently sulking like a grounded teenager, resulting in my having downloaded OpenOffice instead. It's a nifty little programme, and free for people like me who are generally too broke to pay attention. They have a donations button on the site, which is cool, since I feel wrong about using something that is saving my sanity (and writing) and not paying anything for it.

This means I can now get the blog post I've promised Thea Atkinson over at GonzoInk done - she's graciously agreed to push the date back. In the meantime, head on over to her blog say hi - & if you get the chance, I seriously recommend Formed of Clay.
Once again, one of those stories I wish I'd written.

On writing news - Basement Blues is done. I'm putting it together with 2 other short stories, and if I can get the cover art sorted, should be on Amazon as an e-book for the 1st of June. I'm dropping WolfSong back to 0.99 for the month as well, as a 6 month celebration promotion thingy.
Hopefully, this translates into sales; I have a broken tooth (don't ask) and my dentist appears to want a condo in France, judging by the price to fix it.

In more writing news, Naomi Clarke posted a review of WolfSong on both Amazon & GoodReads . I had an absolute fan girl moment; because a writer I truly admire read my book, liked it - and cared enough to point out the flaws in a really constructive way.

I've had other reviews that pointed out pretty much the same issues. I think - and hope - they've made me a better writer, because I can't disagree with any of them. In the six months since WolfSong got published, I've learnt more than in all the years up until now, and that can only be a good thing.


Posted by Unknown at 19:44 No comments: Links to this post

Email ThisBlogThis!Share to TwitterShare to FacebookShare to Pinterest
Labels: Basement Blues, round up, WolfSong

After a fantastic week discovering bits of Melbourne, we flew to Brisbane. I'm still quite stunned at how efficient and fast the flying process is there, quite unlike the U.K. Although I'm assuming I fit some sort of profile security was looking for, since I got tested for explosive residue on every flight from that one onwards.
I know some people get upset when they're targeted. Personally, I'd rather go through the process because I like knowing they take security seriously, and I'm about to climb into what it is, essentially, a flying tin can.Without a parachute.
Also, it was really quick, and quite interesting; a metal rod with either an electronic head (Melbourne airport) or a type of cotton swab (Brisbane) is waved over your hand-luggage and clothing. The read-out takes seconds and staff were cheerful and friendly the whole way through, which is pretty awesome considering their job can't be that much fun.

After collecting a hire-car (brother/sister road-trip - Yay!) we headed up the coast to Noosa, a nice little resort town about an hour away.

Since it was on the way, we took a detour and spent a couple of hours at the Australia zoo. It's pricey to get in at $100 dollars a pop - and as far as I'm concerned, worth every penny. It's pretty unique as there are a number of interactive areas; you can touch koala's, hand-feed kangaroos, walk through the bird enclosure - and there are opportunities to do things like feed the elephants and walk a tiger.

The place is huge, meaning a lot of walking - my marketing mind was recommending a hire shack for segways or mini-golf-carts - especially after a couple of hours, when my leg decided that between the flight and the walk it was started to feel grumpy. It also means large, natural enclosures and happy looking animals, which is the main thing. I could have happily spent a week there. The Irwin's have done a great job continuing Steve Irwin's legacy. I imagine he'd be proud of what they've achieved here.

We hopped back in the car at closing and headed on to Noosa - actually a little place called Noosaville, as it turned out. My brother had booked a house on a canal; which turned out to be 3 days of bliss. I ended up swimming in the sea when we finally found the beach. It's the first time I've been swimming any where since I broke my leg two years ago. It's really freaky realising just how much metal in one part of your body throws your equilibrium off in the water. Let's just say I didn't stay in long - but it was great.

After Noosa, we headed up to the Gold Coast (other side of Brisbane) and stayed with some friends for my last couple of days in Australia. It rained for most of the time; even so it was easy to see the beauty of the place, although I seem to be allergic to something around there and got a really weird rash. Irritating, but nothing serious - although I was glad it wasn't too hot; heat and skin issues are not a good combination.

Best time : Um, all of it, really time except...
Worst time : My brother deciding to jump off the boat we were on into the canal while on the Gold Coast. I googled the canals before I left the UK. I know what lives there. The fact that they have to have netted swimming areas in the canal (one of which was about 100 metres away from my brothers attempt to feed the bull sharks) tells you a lot. I. was. not. amused.

The plan is to head back there for Christmas - bringing the folks out from S.A. It will be the first family Christmas together in a number of years, so I can't wait. If you've been thinking about a trip to Australia, stop thinking and book your ticket. It's a bit pricey, but worth every penny.

There is something totally enviable about the ability to fall asleep in under 5 seconds.. 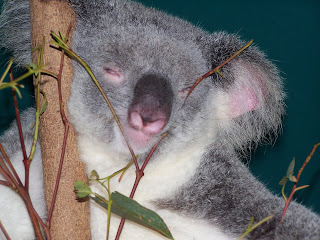 Fishing from the boat on the Gold Coast. Didn't catch anything, which is good, since I doubt I could bring myself to kill anything unless I was really starving. The netted swimming area is straight ahead past the bridge. 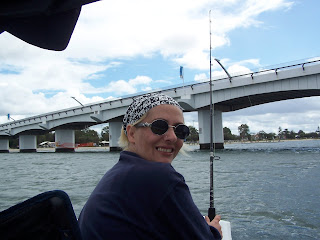 The tree outside the holiday house in house attracted these little guys by the score, as well as crows, cranes and bats. 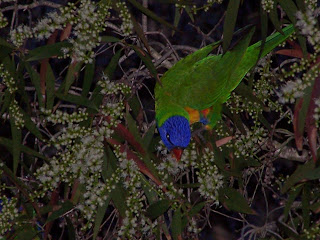 Gorgeous boat on the Gold Coast. The home behind it is on a man-made residential island. 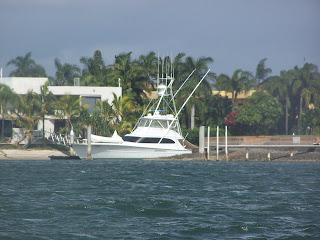 I'm back. Still mildly jet-lagged, and frankly, posting this as a way of delaying finishing my finance assignment. Mildly tanned, and madly in love with Australia. By the way, never mind the unique wildlife and gorgeous scenery. The food alone is worth the trip out there. And oh, man, that place is clean. I've lived in London for 8 years. It's exciting, frantic - and filthy. In Melbourne, the closest I came to seeing litter in the roads was at around 11:30 at night in the city centre, when the crowds thronging the streets were treated to the sight of my friend throwing half his kebab over my arm by accident.

I had a week galloping around Melbourne, which seems to have non-stop festivals and events happening. I honestly think I could spend 6 months in that city and not see everything.

Best moment in Melbourne : the birthday braai (and massive steaks) at my brother's house. 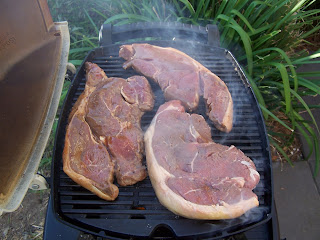 Scariest moment in Melbourne : discovering that there are genuinely large freshwater sharks in parts of the planet (Northern Australia and New Guinea). Not bull sharks, which I knew about. Spear tooth sharks are incredibly rare - and bloody big. The smallest one I saw at the Melbourne aquarium was bigger than me. These are apparently juveniles. And while they are not known to pose a threat to humans (unlike bulls which have a serious attitude problem), guess who had no inclination to swim in Australian waterways after that? Unlike my brother, who gave me heart failure by jumping off a boat into a canal on the Gold Coast. The image here is from Wikipedia, taken at the Melbourne aquarium, since I had my usual effect on electronics & couldn't get my camera to work.

Happiest purchase: finally getting my paws on some liquid graphite. For some reason they don't import it to the UK, & I've been wanting to try it for a while. If the sketches work I'll post them in the Shadowkatz blog, which has been sadly neglected for a while.

Happiest moment : Catching up with old friends, and making new ones.

Next round-up will be Noosa & the Australian zoo. In the meantime, a couple of pics of the Melbourne skyline, and the possum that decided to hang out with us one night in the backyard. 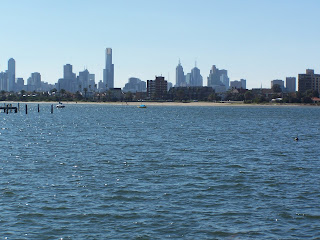 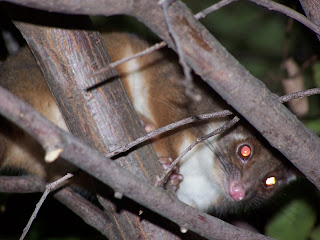 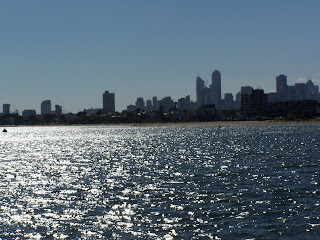 Posted by Unknown at 14:02 No comments: Links to this post