Quarter the Moon went live on Amazon today - click here for the Amazon.com link, and here for the UK version.

I had a couple of new shorts that cover some of the back story of the characters; Room Mates establishes how  Astrid and Ruth met from Astrid's POV, and it's a bit darker than the normal Blue Moon stories. Then again, Astrid is definitely the darkest out of that bunch and she's utterly ruthless when it comes to taking action. I think the story demonstrates that quite nicely.
Yes, Astrid, There is a Santa was originally a Creepfest tale published on Jason McKinney's blog. It's written in Ruth's voice, and takes a fun look at what a centuries old vampire's reaction to Santa could be.

They've been bundled with Basement Blues and Die Laughing as a collection, so buyers get a nice little package when they click the link. 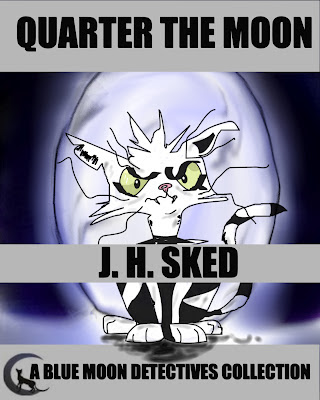 The cover is a lot lighter than my normal ones - the humour of the stories seems to be what readers like the most, so I decided to tap into that. If the reaction is good, I may stick to this style with the series going forwards. Shout Yay or Nay in the comments; if I get enough Yay's it's a definite. (This is the best part about self-publishing - you can tweak your cover art as and when it suits you.)

I had a lot of fun slipping into the different character voices for these shorts - they feel like old friends. I'm not sure I'd ever take them into one of the longer stories - Billy just rings all the bells for those - but I'm not ruling it out either. And there's always a chance of a spin-off into Astrid's (very) long history, which would have to come out in her voice. The odds are that those will be very dark indeed, and at the moment the dark fantasy is being channelled straight into the Crescent tales, so that won't happen for a while.

I also experimented with adding graphics in-between the stories. I rather like the effect; it lets the reader know that particular story is done and also adds a cool little visual. It also means I get to combine my writing and my art, and I'm loving that part of it. I didn't blow up my PC or Amazon achieving it either, which is a major plus point for me. *grin*

Just for kicks, here's a snippet from Room Mates for you.

One
“We’ve had trouble keeping tenants in the property,” the agent told me.
“Really?” I murmured to be polite, parting the dusty drapes covering the lounge window and looking out to the street below.
“Yes. Um.” She cleared her throat, delicately. “It’s been sitting vacant for a while, and the owner has dropped the rent by quite a bit.”
I nodded and let the opportunity to grill her a bit more pass; I knew exactly why the letting agent was having trouble keeping their tenants for more than a couple of weeks. She was standing in the corner in a blue nightgown, scowling at both of us.
House hunting is a chore. House hunting as a vampire, when your options are limited to the few letting agents desperate enough or sleazy enough to meet new clients after dark is both a chore and extremely annoying, although looking for new digs in winter helped.
Tip to anyone who finds themselves in my situation – only look for a place in winter. It gets dark early, and most agents assume you work during the day.
I’d learnt some years ago to pick female letting agents if possible. There’s a limit to how many times you can


bury agents without running out of agencies. 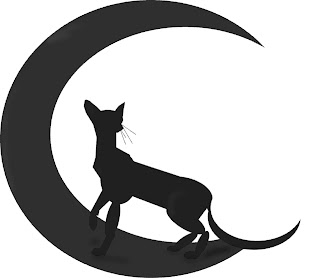